Before adopting Jerry, we arranged plans for a couple of out of state friends to come visit.

After adopting Jerry, we were very nervous about having them visit because of his fear towards strangers and how aggressive he is towards them.

Jerry had been on his behavior meds for a little over a month prior to the visit.

Upon arrival, he was very nervous about the guests just as we had anticipated. We’ve been working with him and seeing improvements on walks with strangers in a distance but hadn’t pushed him to having strangers in his own back yard.

It was a typical response, he barked aggressively towards them at start. After about 20 mins of ignoring him completely and throwing peices of hot dogs in calmer seconds, we put a muzzle on him (for the safety of our guests) and set him free in the yard as being on a leash seemed to irritate him more.

He spent about 30 mins rolling around in the grass (trying to escape the muzzle) but paid no attention to the unfamiliar people.

After an hour, we took off the muzzle. He was comfortable with the strangers sitting but barked when they stood.

After two hours, he was comfortable with them standing and sitting but kept his distance.

After a few hours, he was very comfortable with them. The guests played ball with him and pet him.

As the week progressed, he cuddled with them on the couch and even snuck into bed with them.

When they asked him to “come”, he did so very proudly.

After enrolling into Animal Behavior College and starting my training career working with my own two dogs- Jasmine, an all american “mutt” & Kyah, a border collie/chow, I wanted to extend my knowledge with a smaller breed dog.

I had my heart set on a French Bull Dog.

Already having two bigger dogs in a small apartment, we decided to upgrade into a bigger two bedroom.

While at work at the dog daycare across the street, I decided to look at available dogs from Boulder Humane Society and to my surprise was a big eared and big eyed handsome frenchie mix. I HAD to go check him out.

I rushed home and somehow managed to convince my boyfriend Shane to take me there to look at “Troy”.

When we arrived, we browsed the kennels. I can’t help but wonder each time I visit these sad little souls “what did you do to end up here?”

There was Bean, a brown and black Chihuahua/Doxie mix who had bitten someone and couldn’t be adopted to any family with children. He was very cute and I still was attracted to him. After all, I wanted a “project,” a dog who could teach me harder things.

Then we came across “Troy”
He looked at us with those big, helpless eyes and Shane & I both loved him instantly. We had to meet him.

We waited in a small room for the kennel attendant to bring the little guy. Jerry was obviously very nervous to meet us, but did greet us with affection. We decided to bring him home.

The attendant warned us that “Troy” sufferes from fear. The 8 month old puppy had lived as a stray for the majority of his life, never even keeping the same name for a longer period than two weeks. He had been in the shelter once before but returned two days after the adoption.

Troy needed someone with patience and I knew that we could help each other.

On the way home, Shane and I thought of names (Troy didn’t know his name) and we decided to call him Jerry Garcia.

I remember the ride home and feeling excited but nervous at the same time. I didn’t want to fail Jerry. I wanted him to gain confidence so I promised him that I would never give up on him, & that he had finally found his “forever” home.

The introduction to Jazzy & Kyah went a lot better than I had anticipated. We introduced him to Jazzy first and after that went well, we proceeded to Kyah. She also did very well. Jerry seemed comfortable.

We spent the next few weeks gaining Jerrys trust. We walked him everyday. He was calm and quite each time we took him out.

As the weeks passed, Jerry started becoming “barky” on our walks and started showing signs of fear to strangers.

The problem became more and more likely each day.

One day, after having Jerry for three months, a stranger approached him and he bit her on the shin.

As someone who wasn’t experienced with fearful dogs, working with him was tricky. He barked at tiny ant people from the highest trails of the mountains, miniature pictures of dogs on the tiles of walls, inademen objects like electrical boxes, and of course every stranger that walked passed. He was only comfortable with his own family.

We needed an expert to guide us in the right direction.

We took Jerry to behavior modification class. We were advised to start Jerry on anxiety medication where teaching him that not everything would hurt him would be a lot easier and faster process.

I decided to start this blog to record his progress.

It will be a learning process for everyone, but there is faith, and a promise made that we will never give up on him. 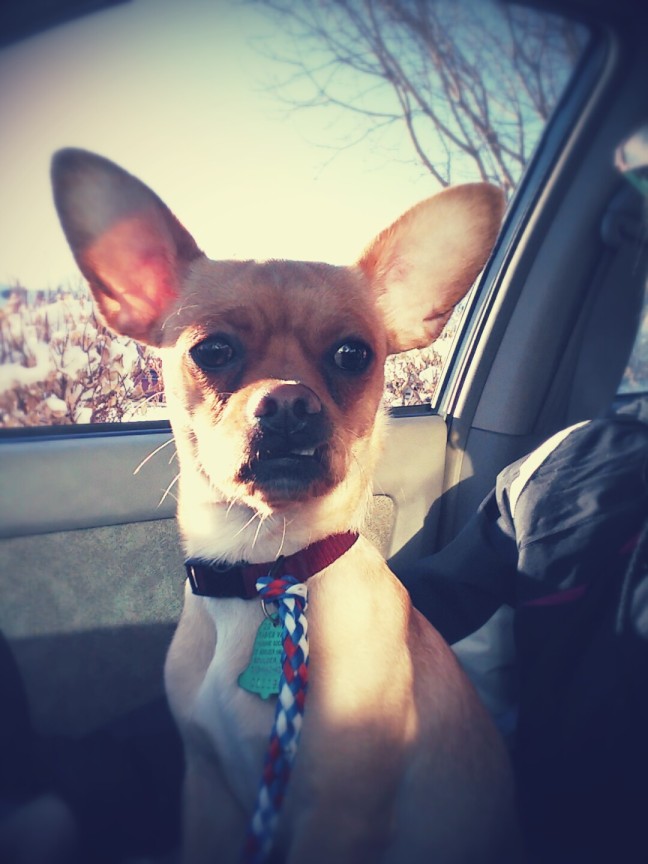